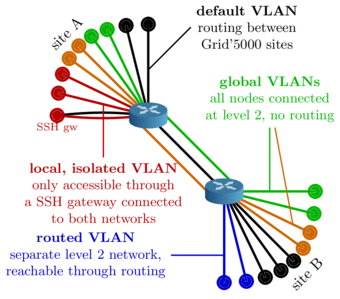 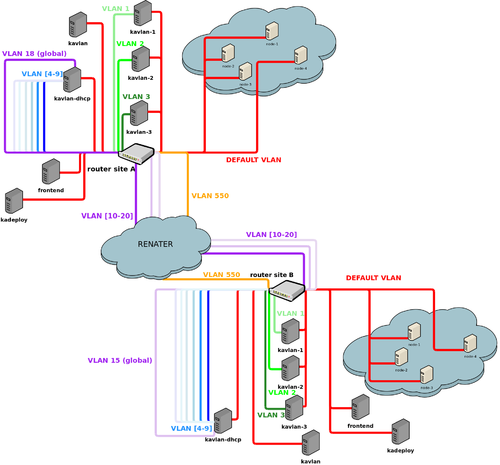 Said differently: KaVLAN allows users to manage VLANs for the network connection of their Grid'5000 nodes.

Behind the scenes, KaVLAN actually changes the configuration of the network switches of Grid'5000 infrastructure, to set the VLAN membership (VLAN ID) for the ports which are cabled to the network interfaces of one or more nodes.

The benefit is a complete level 2 isolation for users' experiments.

It is however important to note that KaVLAN does not guarantee performance isolation: on sites with a hierarchical network (such as Nancy), inter-switch links may indeed be shared between various VLANs/experiments.

For experimentations involving network reconfiguration, KaVLAN is to be used together with OAR and Kadeploy (for the resources reservation and to gain control over the operating system and network configuration of the nodes)

Please note the installation status of KaVLAN for all Grid'5000 sites:

3 types of VLANs are available for users in Grid'5000: local, routed and global.

See the 2 schemas on the right of this page, which illustrate KaVLAN big picture and architecture.

From the IP routing point of view, a local VLAN is completely isolated from the rest of Grid'5000. No IP routing is configured in any router of the infrastructure. Therefore, to reach your nodes inside that kind of VLAN, the Grid'5000 infrastructure provides a special host you can hop by: the SSH gateway of the VLAN. For each local VLAN, the hostname of that SSH gateway is: kavlan-ID.

Then you can connect to any of your nodes within the VLAN using hostnames such as hostname-X-kavlan-ID (adding the suffix -kavlan- + the VLAN_ID to the regular hostname), for instance from the SSH gateway of the VLAN, or from node to node (with the default provided DNS configuration in the VLAN).

The figure below shows two jobs using KaVLAN: each job has its nodes isolated in a local VLAN (green and purple). The other nodes are all in the default VLAN (red). The only way to reach the isolated nodes is to hop by the VLAN's SSH gateway machine (kavlan-1 and kavlan-2 in the figure). Technically speaking, the SSH gateway has two Ethernet interfaces: one in the default VLAN and one in the dedicated VLAN. An other way to reach an isolated node is to use the kaconsole command. 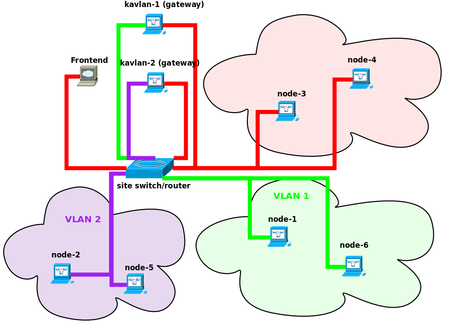 Unlike local VLANs which are isolated, routed VLANs are not isolated at the layer 3: IP packets are routed. Therefore you can reach the nodes inside a routed VLAN from the rest of Grid5000 (e.g. from the default VLAN, or from another routed VLAN). No need here for a hop by a SSH gateway, as it is the case for local VLANs.

Nodes in the VLAN are reachable with the following hostname: hostname-X-kavlan-ID (same naming scheme as for local VLANs), from the frontends of the sites for instance.

Global VLANs are VLANs which spread on all grid5000 sites. Therefore you can configure nodes of different sites in the same global VLAN, i.e. in a same Ethernet network (no inter-site IP routing required, nodes in a global VLAN use a same broadcast domain).

(underneath they use the IEEE 802.1ad encapsulation, also known as QinQ to provide a same layer 2 network for all sites.)

There is exactly 1 and only 1 global VLAN provided by site. If that VLAN is already reserved by another user, you can try to get one from another site. Reservation must be made on the site of the global VLAN.

Since it is a same layer 2 network, no routing between the nodes which are placed in a global VLAN is required (even from site to site).

To reach nodes inside a global VLAN from outside, routing is configured on the router of the site where the global VLAN is reserved. The hostnames of nodes within a VLAN follow the same scheme as above: hostname-X-kavlan-ID.

Using KaVLAN requires to works with deploy reservations because it necessarily involves reconfiguring the network stack of the operating system of the nodes.

To obtain both nodes and a VLAN, you must reserve kavlan resources (VLAN-IDs) with OAR using the oarsub command. As shown in the table above, there are 3 kinds of resources defined in OAR for VLANs: kavlan, kavlan-local, kavlan-global. For example, if you need 3 nodes and a local VLAN, you can run:

If you need to run that command from outside the shell which is started by OAR for your reservation, you have to give the OAR JOBID.

Either ways, you should get a VLAN ID integer in the <1-3> range for local VLANs, <4-9> for routed VLANs, and greater than 10 for global VLANs (only one global VLAN ID is available per site, that should be the one of the site you are connected to).

See below the KaVLAN ID, and associated IP subnets (served by DHCP in the VLANs)

IP subnet assignments for the sites within a global VLANs

(More info in the Network page)

Setting up the VLAN

Configuring the VLANs is done with the kavlan command.

All the options of the command can be show using --help, as follows:

So, once you have a kavlan job running, and know your vlan ID, you can use the kavlan command to put some network interfaces of your nodes in your VLAN (and later, back into the default VLAN) at anytime during the lifetime of your job.

In case of a node with multiple cabled network interfaces, each of them can be used, with the following naming:

A DHCP service is provided in all VLANs (local, routed and global)

Once you have put network interfaces of some nodes in a VLAN, you can down-up them, or restart the networking service of the operating system (with kaconsole3 for instance, or using a command line with some bash magic like '| at now + 1 minute', to run the command asynchronously and overcome the network disconnection that will occur), or reboot the node (with kareboot3) in order to get a relevant IP for the VLAN.

If needed for your experiment, please note that the kavlan command allows to deactivate the DHCP service in a VLAN.

Reminder: for local VLANs, you are also allowed to ssh to the VLAN's SSH gateway, which is named kavlan-ID.

Please look at the other KaVLAN pages for examples of usage (look at the see-also dialog box at the top of the page).